Books and The Board 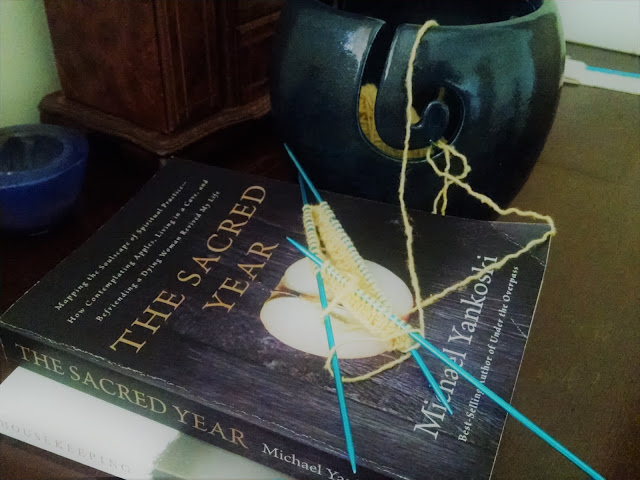 This April is winding down with a cool and drizzly afternoon.  I've tucked in to review the focus board projects that I had hoped to complete by the end of the month.  Not as good of a run as my late winter list.  In fact, only one project has been worked to completion, a Dagorhir herald's surcoat which I hope to share photos of soon.

Two of the items, a second sewing project and a house project, have barely been touched.  Most likely they will push on ahead onto the late spring list where they will glare at me.  They are not my favorite things.  The second house project on my list, making my front lawn look more lawnish, has made it past the threshold of "good enough."  The territory claimed by weeds had been reduced from 75% to about 25%.  It still needs attention, but not enough to claim a spot on The Board.

The last two items, the novel and the knitting, fall into the I-should-have-known-better category.

It has been years since I have finished a novel, the last one being Aldous Huxley's Brave New World.  Not for the faint of heart.  This season I was going to "allow myself" the luxury of reading something for entertainment, and I ordered up my copy of Housekeeping, of which I have heard great things.  I made it about a quarter of the way through.  Maybe novel reading just isn't me anymore.  Instead, I have become absorbed in The Sacred Year picked up on a whim from a discount store.  This is probably one of the most thought-provoking and inspiring books I have read in a very long time.  Highly recommended.

...and last but not least: socks.  My first attempt at a sock made it to the third row before I realized that I had already screwed it up.  Oy vey.  Now I can understand why some sock projects take literal years to complete.  So the internal debate rages on as to whether it stays forever on The Board to nag me to completion, or it gets tossed aside, reserved as an in-betweener project.

So, I get to take three items (four?) off of The Board going into late spring.  This means, of course, that I get to add three new things to The Board, the best part.  I'm not sure how realistic any of this is, since late spring runs us right into Ragnarok.  I have hopes that this year's preparation will be much less frenetic than some previous years, so maybe?

Year-end at the school fellowship means our weeks will be peppered with school-related activities.  This coming week is the Spring Concert.  Like everyone else, I have been feeling restless in our school routine... tired of the books and worksheets, itching to get my hands dirty or do some exploring.  I'm not sure how long we are going to last.  Ah, spring. :)
Posted by Ravenna at 6:24 PM